Crete is a very safe destination with minimal incidents of theft, burglary and attacks on tourists.

All of our vehicles come with comprehensive insurance (with 1000 euros excess) and car assistance 24/7.

Furthermore, you can call or text us any day at any hour for information, recommendations and in the event of any problem you may have. If it is necessary we will reach you wherever you are in order to assist you.

In the warmest months of the year (July-August) the day temperatures range from 25°C to 30°C and in the coldest months (January-February) from 10°C to 16°C.

Crete’s road network is generally in good condition with many asphalt roads.

However, driving a motorhome in Crete requires caution and driving slowly on many mountains or any other secondary narrow roads. Inside villages, we suggest following only the main road and again being cautious. Please avoid driving into the old parts of towns even if it is allowed by law. Whenever you drive or try to park near trees, balconies, awnings, etc., be careful not to damage the upper part of the vehicle. 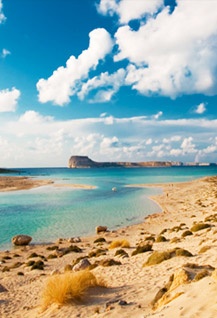 Crete is famous as a holiday destination, and with good reason: apart from the sun, there is a huge variety of scenery, with the green mountains of the west contrasting with the drier east, all surrounded by a choice of excellent beaches. Add to this the evidence of dramatic history, from the Minoans and Ancient Greeks and Romans to the Venetians and Ottoman Turks, and you have an island full of interest which is a joy to travel around. The good road network gives you the chance to see all of Crete’s main sights in a relatively short time, and get a taste of the distinctive culture of the mountain villages. We’ve prepared the following suggested tour for campervans. The total distance is about 900km, but obviously, everyone will be tempted to make diversions. The longest drive takes about two and a half hours, and the whole tour can be done comfortably in two weeks.

We’ve chosen as your starting point the airport of Chania, which is near the ferry port of Souda Bay in the northwest of the island. Heading east on the north coast highway, your first stop is at Georgioupolis, a village that has grown into a large resort. One of the longest beaches in Crete starts here, going east for many kilometres. It is an ideal spot to enjoy a swim - and the parking is free! On the edge of Georgioupolis, across a river, is Kalivaki beach – one of the few beaches on the northern side of Crete where you can swim in calm seas even on the windiest days. The tall trees around the parking area provide shade and overnight parking is allowed. 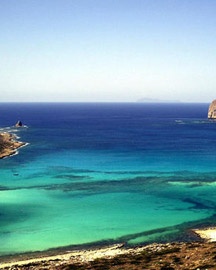 Rethymnon, with its beautiful old Venetian port, is the next town along the northern highway. The sites include the castle and Lake Kournas, the only fresh-water lake on Crete and a haven for birdlife. Parking and overnight stops are allowed in the Council car park in the Marina in Rethymnon, which is right next to the beach, great for daytime and near enough to enjoy the nightlife in the Old Town. (An alternative is Elizabeth campsite on the beach about 5km east of the lake.)

Travelling east, a short detour takes you to the fascinating Byzantine monastery of Arkadi. Heraklion is the capital and commercial centre of Crete, and from here you can visit Knossos with its outstanding Minoan Palace, as well as the famous Labyrinth of the Minotaur. There is parking near the centre of Heraklion and the Archaeological Museum, which is the largest on the island and definitely worth a visit.

A short way to the east, at Gournes, is the Cretaquarium, which gives you a great view of life beneath the waves of the Mediterranean. You could stop for a night in Gouves, at Creta Camping A few kilometres s further on is Hersonissos, famous for its nightlife. There is a small camper stop here marked Caravan Camping but with only a few campervan places. Further along the coastal road, you reach Malia with its fabulous archaeological site, just after the seaside village of Sissi with its charming port. (Camping Sissi is nearby.) 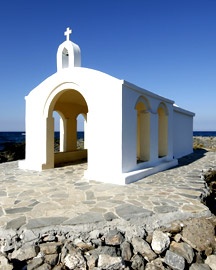 If you are not interested in these developed tourist areas you can avoid them and take a detour up to the Lasithi Plateau to visit some traditional Cretan villages. There are plenty of pleasant walks around this plateau, which is a sea of windmills. The Dictaean Cave is fascinating, one of the largest and most important in Greece, and revered in ancient times as the birthplace of Zeus. There is also overnight parking available there. Continuing east, you come to the picturesque small town of Aghios Nicholas, built around a small bay, where overnight stops are allowed in the marina car park.

By taking a small detour north, you can see Elounda with its luxury hotels and the village of Plaka, where overnight stops are permitted in the free car park north of the village, by the sea. From here you can take a small boat to visit the famous island of Spinolonga opposite, where you can visit the Venetian castle and the former leper colony. This whole area is situated in a protected bay, so the sea is always beautiful for swimming.

From here you begin your tour of the eastern end of Crete. You can visit Sitia and the castle of Kazarma then walk around the narrow streets before eating at one of the fish tavernas on the seafront. A narrow windy road takes you to Vai, one of the very few natural palm tree plantations in Europe. Today this is a protected area but you are allowed to walk along designated paths and can swim in the bay. A little further south is the Kouromenos beach where overnight stops are allowed (near an old building on the south side). Nearby is the Monastery of Toplou and the archaeological site of Itanos, and about two hundred metres north of the village there is a beautiful beach, where you relax without any modern buildings (and very few tourists!) insight.

Your next destination is the south coast, where the Libyan Sea has the clearest water you’ve ever seen. Here there are high cliffs with lots of caves and innumerable small rocky islets offshore. This area is ideal for snorkelling or diving due to the calm water, which is often quite cool due to the depth of the water inshore. The only town along this whole coast is Ierapetra: Camping Koutsounari is situated on Koutsounari beach shortly before Ierapetra. 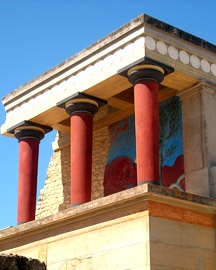 After Ierapetra, the southern highway leaves the coast and goes through pine forests, where it is worthwhile stopping at Viannos, a traditional Cretan village. Further along, you will find yourself in the most agriculturally developed area of Crete, the Messara Plain. There is also the archaeological site of Gortyn just above the road after the village of Aghia Deka. In Roman times Gortyn was the capital of Crete and Libya. Shortly afterwards you reach Phaistos, the second most famous Minoan site, and then Matala. This was an important port from Minoan times through to the Roman period and became famous in the 1960s when it was ‘discovered’ by hippies, who lived in the Roman necropolis dug into the cliffs. Some of the artwork made by those visitors can still be seen. At the opposite end of the beach, there is a small tourist village attempting to keep alive the atmosphere of those times. Camping Matala can be found opposite the wide sandy beach. Despite being a tourist area, the beach is kept so clean that Matala still feels ‘natural’.

A few kilometres north of Matala, there is the long beach at Kommos, which was also a port in ancient times. Since there are no hotels or other buildings so you can enjoy a wonderful stay right next to the sea. (This beach is a protected breeding ground for sea turtles, so night stops are not permitted.) 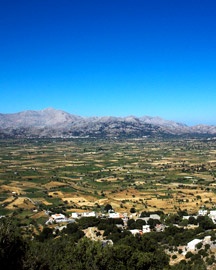 Continuing west you will come to the village of Aghia Galini. Camping Aghia Galini lies about 2km to the east: alternatively, you can take the road to Rethymnon but turn towards Sachtouria en route to Aghios Pavlos, a small seaside village. About 1km before the road ends, turn right and after about 100m you will see a big flat area where you can stay overnight. This is ideal for beach lovers who can visit the sandy beaches down below.

If you retake the road to Rethymnon, turn left at the junction for Plakias and the Prevelis Monastery. This brings you to the Kourtaliotiko Gorge, where you can stop and explore the springs tucked away in the rocks below the road as well as enjoy the view of the beautiful cliffs around. For those who like walking, you can park in the large car park at the monastery and walk down to a small lake which has a palm forest and river nearby. Back on the road to Plakias, turn after the village of Lefkoyeia towards Sandy Beach – a beautiful beach with few no buildings but with water and a lot of tamarisks, with plenty of room to park overnight. Then you can visit Plakias, which is an area with fabulous beaches and every facility - including Camping Apollonia. 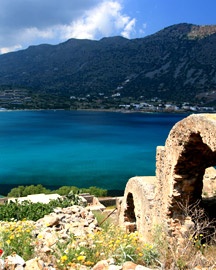 Continuing west you come across the village of Rodakino where you can turn left to find the beach of Korakas. It’s also worth visiting the small castle called Frankocastello, renowned for its ghostly cavalrymen. You will arrive at the harbour village of Hora Sfakion.

At this point, the coastal highway is interrupted by the White Mountains which plunge towards the sea. From here you can enjoy the ferry ride to Sougia, which is a small place with a magnificent beach, ideal for an overnight stop. There are two walks available from Sougia: one is from the port to the ancient isolated town of Lissou (about an hour’s walk) with springs and a good swimming beach; the other is the descent of the Samaria Gorge. You can take a taxi from Sougia to the opening of the gorge in the Omalou mountains, then the walk is 17 km (about 5 hours) followed by a boat ride back to Sougia.

Further west on your journey, you arrive at Paleohora – the furthest point west in the South, with lots of beaches and tourist facilities - including an open-air cinema! There are also two campsites: Camping Paleochora to the East and Camping Grammeno to the west. 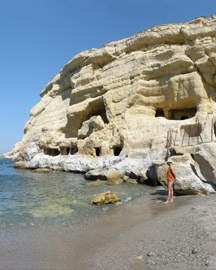 In the southwestern corner of the island lies Elafonissos, with some of the best beaches in Crete. Despite being close geographically to Paleochora, the only realistic way to get there is by going back to Vora where there are two campsites, to the east of the town of Kissamos: Camping Nopigia and Camping

Mithimna. You may need to stock up with provisions at this point, as Elafonissos has no shops apart from two small mini markets. Elafonissos has amazingly turquoise water, just like a tropical paradise. There is a free car park on the beach, where overnight stops are allowed; and since there are so few people after the tourist boats leave at 5 pm it is idyllic!

The last place to visit on this itinerary is Chania itself – the second largest town on Crete and also the administrative centre of Crete. It is the most interesting town in Crete, and walking around the old town is wonderful, especially the Venetian port with its restored mansions and Naval Museum. To the west, there is Camping Chania in Aghioi Apostoli (which is about 6kms away). There is parking at Souda to the East.

We hope this outline itinerary will give you a feel for what can be seen and enjoyed in Crete in a campervan.